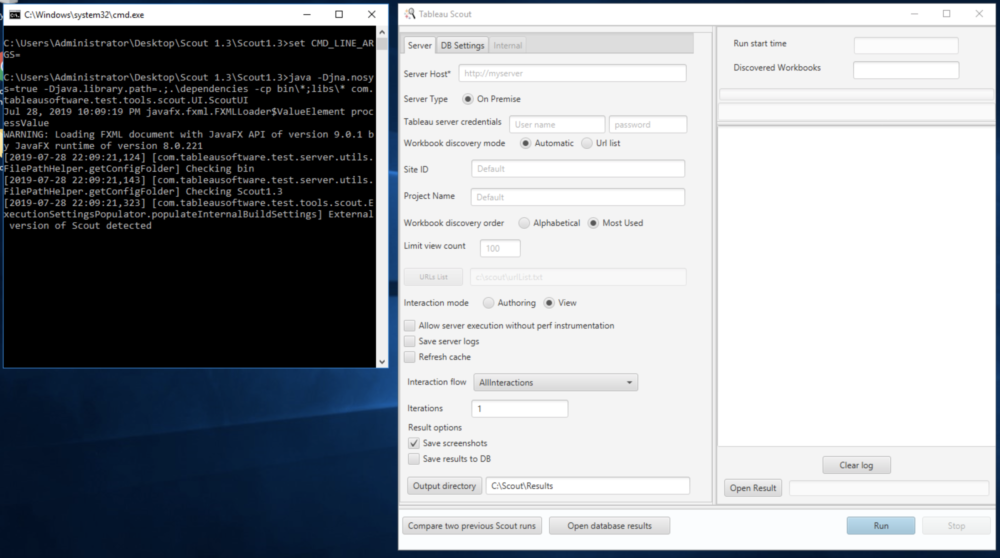 Tableau scout is a neat utility that makes it easy to do some user acceptance testing on Tableau workbooks on Tableau server. The big features to call out are its ability to test workbooks in a specific project or site for performance, load times, errors and also keep a long view of these factors as you make changes to your server topology or change the data source. It can also record server-side statistics relating to the tests and store the results in a database for regression testing and long term views of how your performance is changing with upgrades.

In this post (the first of many), I’m going to cover how to set it up on your computer. At the time of writing, it only runs on a Windows machine so Mac users like myself have to run this on a remote machine or a virtual image.

At the time of writing, the latest version of Scout is V 1.3. You can grab Tableau Scout from the following community forum page. Tableau Scout is a community tool and as such is not officially supported by Tableau but is built as a utility for the community mostly by Tableau developers but also by members of the community. Check the forum page above for version support and other release updates.

Tableau Scout uses the Java so it requires you to install Java then as an additional step add Java to the Path variables in Windows so it can be referenced in the command line.

Let’s do the first step. Install Java and be sure to install the 64-bit version. By default, the installer you get is 32-bit so be sure to select manual downloads and select the 64-bit download. Here’s the current link to the download page.

Once installed you need to set some Path variables. If you use the command line frequently line you’ll be familiar with this step. If not follow along.

First, head to the advanced system settings panel. In windows 10 you can simply search for it.

Once there you should see the following options on the left of the image below. Select the very last option titled “Environment Variables” labelled 1 and that opens a second window. We’re only interested in the green options, New and edit.

First, let’s set the System variable to point to the Java Home directory. Set Java Home variable by selecting the new option highlighted in green in the image.

Now let’s edit the Path system variable and add a new item to the bottom pointing to the ‘bin’ folder inside the Java Home directory. This is why we set up the first system variable. Doing it this way allows you to change the version of Java you’d like to use by just repointing the Java Home to a different folder.

Now we’re all set we can check to make sure everything works as it should. Open the command line and run the commands highlighted in red. echo %JAVA_HOME% and after that java -version

Step 3: Your first run of Scout

To run Scout, unzip the folder you downloaded and inside of that folder, simply double click the highlighted batch file. You will get a prompt relating to permissions.

The first time you run it you’ll see the command line fire up. It can take a while for the Tableau Scout interface to show up so be patient. If it fails it might close without any warning so if it does this more than a couple of times then record your screen and play it back to catch any error codes that come up. The command line should look like this if it’s worked and Tableau Scout will have loaded.

In the next post, we will cover the process of running scout and how to configure it for different types of tests but for now, have a go and see where you end up.