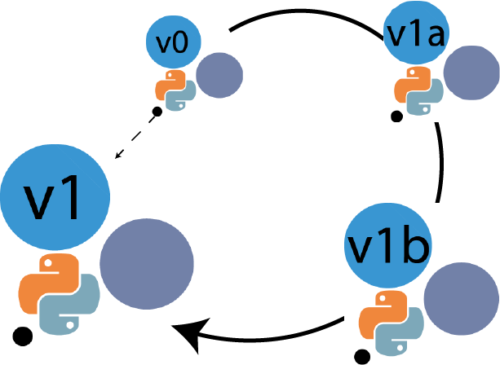 This is the second post exploring the Alteryx Python SDK extension module.

Using as a template the very basic Alteryx Python SDK tool, I will now start to add some functionality with the objective of understanding how to handle:

The ultimate goal of this v1 of the tool is to obtain a tool that will have a simple interface allowing the user to select the number of columns, the number of rows and the string to use to fill all the cells.

Following the recipe previously described, there are just a couple of tweaks needed, as I want a numeric spinner to set the number of columns:

I do not know javascript, so I find quite useful to copy and modify the templates. Also,  make sure you have the correct definition in the head section:

With that, the first step –adding multiple columns– is finished. You can find the installer here (unzip it if you just want to have a look at its contents). Let’s add now multiple rows (records).

Similar to v1a, I will let the user define how many rows to add (and maybe set some safety limits inside the python code) via widget in the interface (this time, a plain “TextBox”); therefore, right there, two modifications to the existing files are needed:

The next set of changes are also in the python module, within the pi_push_all_records method. This is where the iteration occurs (each iteration one record/row is pushed through the output anchor, then the record_creator is reset to generate and push the next record):

And…that’s it! Second step finished. The installer can be found here (unzip it if you just want to have a look at its contents).

The only thing missing from the requirements is something to allow the user to define the text in each cell… I can visualize it now: a text box in the GUI, adding the string variable in the ...Gui.html and retrieving it in the ...Engine.py…It’s getting easier every time.

You can download the installer from here (unzip it if you just want to have a look at its contents).

All in all, still not a very useful tool, but I know now how to create one, how to modify the settings in the GUI and how to retrieve those settings in the Python Engine and push the multiple records and fields through the output anchor… Next post, I will finally get the tool I wanted from the beginning (and show how to add custom packages to the installer).