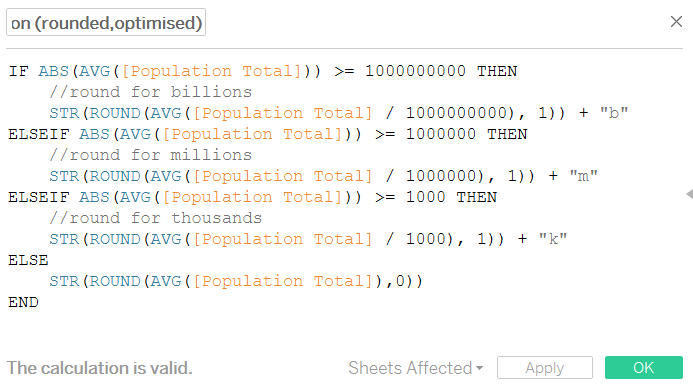 Strings and roundabouts: how to label your numbers in Tableau effectively

Lots of Tableau dashboards feature big summary numbers. They’re pretty nice, and they look like this:

And what’s even nicer is that you can alter the measure’s default number format to automatically round a specific unit, like this:

But sometimes, the range of numbers is a lot wider than sales per state in Superstore. Let’s have a look at population per country in the World Indicators dataset:

Those are some long numbers, so let’s round them to the nearest unit again. But which one? If we round to the thousands, we get this:

And if we round to the millions, we get this:

It’d be great if we could get Tableau to figure out what the nearest sensible unit is. That functionality doesn’t exist yet (as far as I know!), but we can write a specific optimised rounding calculation for labelling purposes. It’s a bit of a long one:

This calculation returns the number you want as a string. It does this by:

Of course, you can also add trillions, quadrillions, and so on, if that’s what your data requires.

This sorts us out nicely:

Now, I’ve deliberately aggregated everything within the calculation, and I’m only using it for labelling purposes. I categorically do not recommend aggregating outside this calculation or using this calculation for calculating anything else. This will result in a mess of rounding errors which can seriously damage your data. But as a final step once you’ve sorted everything out, I find that this is really nice for presenting data.

Here’s the calculation in text so you can copy and paste it into your workbooks:

5 thoughts on “Strings and roundabouts: how to label your numbers in Tableau effectively”