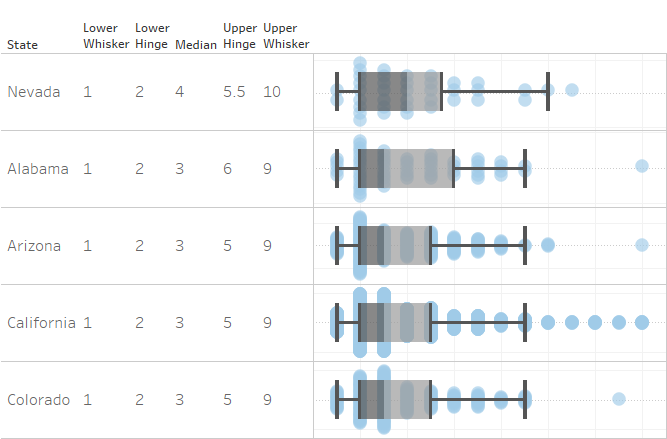 How to do Box Plot Calculations in Tableau

Box plots are great for displaying distribution and in Tableau they’re incredibly easy to make. In fact the simplest box plot in Tableau takes only 4 clicks. Click a dimension, hold ctrl & click a measure, click the “Show Me” tab and select the box plot function and there you go, you have a box plot!

Box plots are made of five key components: the median, the upper and lower hinges, and the upper and lower whiskers. The median is a standard statistical measure and is included in Tableau’s library of formulae, it’s the 50th percentile value, the middle number in a data set. The hinges however are harder to work out because they are near the 25th and 75th percentiles but not there exactly and the distance away from these values depends on the size of the data set.

The hinges Tableau uses are Tukey inclusionary hinges, so named after John Tukey the person who first created box plots. Tukey hinges are the midway points in the first and second halves of data. If there are an even number of data points then the data is split straight down the middle. However if there are an odd number of data points then the median value is duplicated and used by both halves. This is illustrated below where the number sets of 1-5, 1-7, and 1-9 each duplicate their median value. Hinges are then the medians of their respective halves of the data.

So How Do We Calculate This?

First of all, the data being plotted needs to be at the most granular level. This method uses table calculations that requires index formulae computed using the measure itself so before you start, untick the “Aggregate Measures” in the analysis menu. Now for the calculations coming, we are using Superstore data to generate box plots of Quantity by State to create the view below. When you want tailor them to your own calculations, just replace any references to Quantity with your measure of choice and make sure each of your table calculations are computed using it. If you can’t see Quantity as an option for ‘compute by’, make sure the measure is not aggregated and set it as a continuous dimension.

The first part of the window median says that we are taking the median of quantity values, the middle part says the range is starting with the first value, and the last part anchors the end of the range in the middle of the data set, inclusive of the median.

This calculation is a good descriptor of the spread of a data set and also helps to make the whisker calculations clearer.

Now for a final touch of flair, if you want to sort your dimension by these values create an integer parameter from 1 to 5 for the statistics and another from 1 to 2 for ascending or descending and then create a sorting calculation. This new calculation then needs to go before your first dimension with its header hidden. The calculation should be roughly as below, also computed along your designated measure.

And there you go, that’s box plot calculations in Tableau!

3 thoughts on “How to do Box Plot Calculations in Tableau”