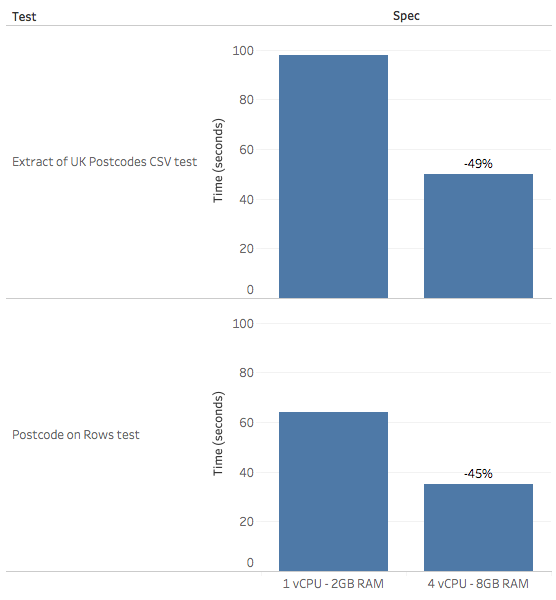 We often talk at length about the hardware requirements for Tableau Server, but what about Tableau Desktop? In this post, I want to show you how a relatively inexpensive increase in your laptop or desktop hardware spec can go a long way to improving your Tableau Desktop experience and productivity.

According to Tableau’s tech specs page, the minimum requirements for running Tableau Desktop are:

Similarly for Mac the requirements are:

Wow, that’s pretty low spec right? That would allow us to get Tableau up and running on some of the more sluggish PCs in the workplace right now, which is great news! But what happens when we want to connect to our large dataset and build some big dashboards that run lots of complex queries?

The fact is, if you’re going to be using Tableau on a regular basis, connecting to more than just a few thousand rows in an Excel file, and you’re planning on building out some workbooks with a moderate amount of complexity, then you’re probably going to want a better spec PC.

If we really want to Tableau ‘at the speed of thought’, then we should do our best to avoid timeouts and crashes caused by resource constraints, so here’s what I believe should be the recommended minimum system requirements for Tableau Desktop. Now for the disclaimer – these recommendations are based on my experience installing and using Tableau Desktop in many, many different customer environments:

Now let’s put some science behind this. Well, some anecdotal science at least.

I decided to test Tableau’s performance in a Windows virtual machine in Parallels on my Mac, switching up the CPU and RAM and then comparing the time taken to do various tasks, for example, loading a datasource, viewing number of records, taking an extract etc.

In my first scenario, I set my Windows 10 virtual machine at 1 single vCPU and 2GB RAM, and for the second scenario, I boosted the spec up to 4 vCPU and 8GB RAM.

I settled on two tests to perform in each scenario:

Using a TDE file of 1.5GB in size and 21.3m rows, I dragged a dimension onto Rows, which will produce a list of 1.19m UK postcodes. I know is a silly thing to do but I wanted to see how long it would take to render.

Using a 94MB CSV file containing a list of all UK Postcodes, I extracted the data into a local TDE saved in C:\Temp. Extracting data in Tableau Desktop is a common practice and can often be rather time consuming, so it follows that if we’re working with Tableau all day every day, we want this to complete as quickly as possible.

Between each test I shut down and restarted Tableau Desktop, there were no other Windows applications running on the VM.  For reference, I used Tableau v10.2. The results are below:

I think the results are pretty clear, in the higher spec machine we saw viz compute and extract times almost halve.

Now I appreciate that your results may vary, since this is a virtual machine on my Mac laptop rather than the real thing, but I hope this clearly illustrates how having a little more grunt in your work laptop can go a long way to greatly improving your productivity with Tableau!